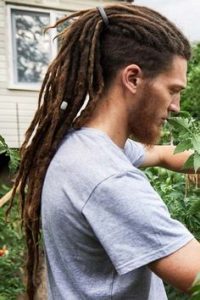 In Sunday’s “Zits” cartoon, teenager Jeremy complains to his parents, “First you wouldn’t let me go to Kevin’s party because his parents weren’t home. And you shot down the idea of Pierce and me going to Aruba for the weekend. Then you refused to buy a jet ski just because we don’t live near the water.”

Zits mirrors our house so perfectly, except for one tiny detail. The cartoon is funny. In our home, the teenager struggles are bone-wearying exhausting and make us want to tear out our hair.
Speaking of which, the teenager hair drama has been going on way too long. I thought I was bad when I was a teen obsessed with my hair, but I was a mere amateur when it comes to Younger Son. Besides, I’m female. Girls are supposed to obsess over their hair. I was so glad when we adopted African-American Younger Son that he was a boy and not a little African-American girl with whom I would have to deal with hair issues. Hah! Little did I know.

For years now, it has been a major ordeal dragging him to a barber shop for a haircut. But after he starts looking like a matted poodle, we really have no choice. Then he sulks for weeks until his hair grows out sufficiently for him to mess with it. Last year, his Afro got so bushy a friend braided it into cornrows for him, which made him look like a girl. But, hey, as long as it was under control, I mostly kept my mouth shut. (I did better at this than my husband.) However, over time, the tight braids became frizzy, and at some point, his hair needed to be washed. This set up a cycle of imposing on our friend to “do his hair,” as I do not have the time or expertise to tackle that job. After a couple of times, I felt the need to compensate her for her work. Then, after realizing I was spending more on Younger Son’s hair than my own, I made him spend his allowance to have it braided. I think he paid her once.

Finally, Younger Son received a discipline warning from the principal of Rocky Bayou Christian School for unacceptable hair length. Younger Son did the responsible thing and neglected to tell us about it until we got an email saying he had a detention for failure to comply with dress code regulations. I suppose he figured if he washed his hair, it might shrink, and he could get by. I didn’t even realize there was a dress code for hair length. Nevertheless, I did my happy dance because now Younger Son had no choice but to shave the matted locks, and it wasn’t even our fault! We could blame everything on the school.

Younger Son’s head was once again shaved, much to his humiliation. He resorted to wearing a knit cap all the time—even during the summer—to cover his shame. It has now grown out a little to where he can spend all his time fiddling with it trying to twist it into dreadlocks. All he talks about is dreadlocks. He incessantly looks up celebrities with dreadlocks on his friends’ phones. (Remember, we are the abusive parents who refuse to give him his own cellphone.) I continue to keep my mouth shut, because his dream of long hair is still at least three years away. However, I must resist the urge to scream every time I hear the words, “dreadlocks,” which is at least every thirty seconds on the days he is talking to me.

Younger Son recently had a dental cleaning and exam with a new dentist, as he had outgrown his pediatric dentist. The bill came to over $400.00 with the usual admonition of “he needs to do a better job brushing his teeth.” I explained (yet again) to Younger Son how important good oral hygiene is, as he will have his current set of teeth for the rest of his life. I also reiterated that we had just spent over $400.00 on his teeth.

His reply? “You’ll spend all that money on my teeth, but won’t spend money for dreadlocks!” I’m secretly hoping he inherited the male pattern baldness gene. 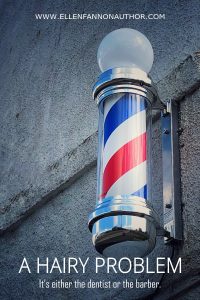