Musicians in the Making

My son’s big dog, Ginger, was terrorizing our cats (once again), who were minding their own business trying to peacefully nap on the desks in the bedroom. After a few minutes of listening to the hissing and growling, and chastising Ginger, who paid no attention, we finally banished her from the bedroom and closed the door. A few minutes later, I heard a dreadful sound, like an animal in distress.

“Did one of the cats accidentally get locked out of the bedroom with the dog?” I asked Hubby.

He looked up from his computer. Then I heard the sound again, but it seemed to be coming from inside the room.

“Where is that horrible noise coming from?” I asked. “It sounds like an animal in pain.”

“It’s a video of Younger Grandson playing the saxophone,” he replied. “Younger Daughter posted it on Facebook.”

“Ah.” Understanding dawned on me. “Don’t tell Younger Daughter I said that,” I admonished him, as he was already busily typing away on the keyboard.

Younger Grandson must have inherited Hubby’s musical talent. For years, Hubby talked about the time when he played the violin in fourth grade and how much he loved it. So, one year for Christmas, I bought him a violin, along with lessons. As the violin salesman told me, “Commitment to practicing can go a long way in making up for a lack of musical talent.” He was wrong. Hubby practiced diligently for a whole few weeks before giving up. Every time the cats saw the violin come out of the case, they ran for cover. Even the deaf one. I don’t blame them. It sounded like one of their own being skinned alive.

I have a friend who took up the bagpipes many years ago. She must have had some talent because she played with a piping group and they performed at a number of different venues. The bagpipes are one of those things that I haven’t quite figured out if I like or not. On one hand, I think I should like them; on the other hand, I can only take so much of listening to them before I’m “done.” But I recall her saying whenever she practiced, her kids announced, “Mom’s torturing the elephant again!”

I realize there will be some less than melodic tones emanating from the instrument of a novice musician. The disharmony is simply the price to be paid on the road to musical greatness. But, sadly, without a modicum of natural musical ability, the old adage, “practice makes perfect,” doesn’t always apply. Ask our cats. 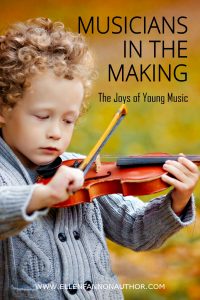