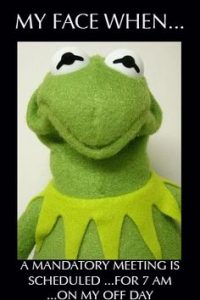 It is rare that I find something in the comic section so funny that I laugh out loud. But when I read Dilbert the other day, I was grateful I hadn’t just taken a bite of breakfast. I either would have choked or spit food across the table. Dilbert is a satirical comic strip about micromanaged characters working in an office with a clueless boss. According to Wikipedia, “Dilbert portrays corporate culture as an oppressive world of bureaucracy for its own sake, where office politics preclude productivity, employees’ skills and efforts are not rewarded, and busy work is praised.”

The cartoon that cracked me up started with Dilbert, the engineer, thinking, “I have exactly the right energy for being highly productive today. It’s a rare moment of clarity and restfulness. I can’t wait to see how much I’ll accomplish.”

At that, the boss pokes his head into Dilbert’s office and says, “You’re late for mandatory chair sitting safety training.”

This utter ridiculousness took me back to the time I worked one day at week at the veterinary clinic at Eglin Air Force Base. If you think the corporate world is rife with bureaucracy, you haven’t seen anything until you work for the government. I loved the clinic, the people, the clients, the change in pace from my regular clinic, and the availability of having everything I needed. What I didn’t like was the bureaucracy. Before I even took the job, I had to fill out a stack of paperwork that caused the death of at least two trees. I had to undergo several mandatory training sessions that had absolutely nothing to do with my job, have a physical exam in which the doctor did nothing more than listen to my heart, and wait for several hours to obtain an ID card so I could access the computer. Finally, I thought, I was free to do my job. Little did I know.

No sooner had I started working, than I had to undergo HIPPA training. This was a long, tedious auto-tutorial that covered all the facets of HIPPA regulations in human medicine, none of which applied to me. Yes, as veterinarians, we cannot disclose details of our doctor/patient relationship, but it is rare that anyone wants to obtain illegal information on someone else’s pet. I flipped through the slides without actually paying much attention to them, only to discover at the end that I had to take a test and I couldn’t backtrack. Oops. Was it form HB09586 that you are supposed to fill out for a HIPPA violation, or form HB09587? Gee, I suppose if ever faced with that scenario, I would probably have to look it up, since I sincerely doubt I will remember. Somehow, I managed to get HIPPA certified, and thought that was the end of that. Until the next year, when I had to repeat it. And the year after that, and so on.

Another training I had to repeatedly take was Cyber-awareness. Yes, I realize working in a government office requires a certain amount of control over what goes out into cyberspace. But since I was not working on anything classified, I highly doubted if I accidentally reported to the Russians that Mrs. Jones’ dog, Fluffy, received a rabies vaccine, it was going to be a breach of national security. Still, I filled the necessary squares, because if I didn’t, the computer would not allow me to log in to the veterinary site so I could actually do my job taking care of patients. This was particularly frustrating when I would come in to work and the Cyber-awareness training popped up that had to completed NOW, putting me way behind at seeing clients.

OSHA was another constant training requirement. Okay, I get OSHA, as there are a lot of potentially hazardous materials veterinary personnel are exposed to daily. The problem with the OSHA training was I was given several pages of copies of power-point slides which were unreadable and told to sign off on them. Let’s just say I skipped right to the end and scribbled my signature to get that square filled. I didn’t feel too guilty since it’s not as if I am totally ignorant on OSHA safety in the workplace. Besides, as a peon employee, I had no authority to implement changes, anyway.

Then there was the time the clinic was closed for mandatory sexual harassment training. After half an hour of learning to be more sensitive, I called it quits and said, “Fire me, but I’m leaving to do something productive, like trim my toenails.” I hoped the reference to toenails did not come across as sensual or offensive to anyone.

I understand that mandatory training is necessary for many jobs. My objection is the “one-size fits all” mentality of requiring people to fill squares that don’t even pertain to their jobs. Many of these obligatory training sessions are downright insulting to people with a modicum of common sense. Still, when talking about the government, one can never assume anyone has common sense.

I was fortunate that I got out of government work before mandatory chair sitting safety was implemented. 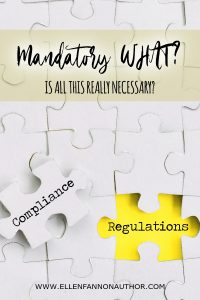