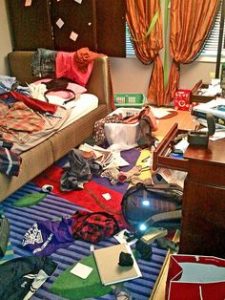 In the “Zits” cartoon today, the mother of the teenaged son, Jeremy, looks with dismay at the garbage dump of his room. He says, “ Someday, I’ll be off at college and you won’t have anybody to nag.”

His mother replies, “I’ll try my best to cope.”

I can completely relate. I can’t imagine having my home the way I want it without worrying about the health department condemning it due to the toxic waste dumps that are my sons’ bedrooms. There are some mothers, I am told, who actually miss their children when they leave home, and suffer from “empty nest syndrome.” I only shake my head in bewilderment. I am so ready for my nest to be empty, especially since my husband and I started off our marriage with teenagers. Sometimes, I feel guilty with the desire to be free. Then I eat some chocolate and get over it.

It’s not as though I particularly enjoy nagging my sons to clean up their rooms. Besides, it seldom does any good unless followed up with threats of bodily harm (hard to do when your sons are bigger than you are) or other punishments, such as grounding. But grounding a teenager is a double-edged sword. It is actually more punishing for the parent than the child, because rather than getting rid of the source of aggravation for a few blessed hours, you are stuck with him. Not only stuck with a teenager, but a ticked-off teenager, which we all know is a contributing factor toward gray hair and heart attacks. So sometimes, it’s just not worth the trouble. One can simply close their bedroom doors and pretend their rooms don’t exist. That is, until you run out of dishes and silverware and have to make a foray into the depths of the unknown to retrieve said items. Did I mention that we don’t allow our kids to eat in their rooms? Hmm.

Grounding a grown son living in the basement doesn’t work well, either. You can always threaten to kick him out, but good luck with that. Even when he finally does move out, he leaves behind a wake of detritus that requires a Hazmat suit and a bulldozer before you can have a prayer of reclaiming the space for normal human use. I know because I’ve been down this road at least three times now, and am currently waiting for Older Son to finish cleaning out his stuff so we can defumigate his room. Meanwhile, my nagging skills are still quite intact.

What will I do, I wonder, when I don’t have someone to nag? Not to worry. My husband still lives here. 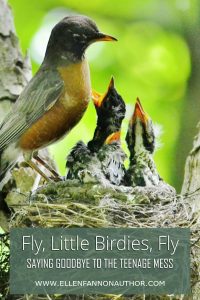