I couldn’t wait to get cataracts so I could have surgery and finally have lens implants that would allow me to get rid of reading glasses—which I am always misplacing. So I was happy when my optometrist told me at my last appointment that I got my wish. I’ve finally got cataracts! (Yeah, I know, I seriously need a life!) To get the ball rolling, I was sent to an eye specialist in Destin. Great! One step closer to no glasses!

At the clinic, I underwent several tests, only a couple of which I understood. But that’s okay, as long as the doctor knows what the tests are for. Then my eyes were dilated for a thirty-second exam (and stayed dilated for 6 hours). Now came the bad news, besides not being able to see for the next 6 hours. It seems my right retina has a “pucker” and before the doctor proceeded with cataract surgery, I had to see a retinal specialist.

It was my scheduled surgery day at work. I had thought I still could function with my dilated pupils. Fortunately, my surgery technician thought better and rescheduled most of the surgery. So I ended up seeing clients, which probably wasn’t much better. I got tired of explaining that I wasn’t “on something,” but it was better than letting people think a junkie was running amok in the clinic.

Now, to schedule cataract surgery. I called the first eye clinic and asked for a callback. Then I waited for several weeks, and, surprise, received no callback. I tried again, and this time I was told I had to come in for an appointment because by then, it had been more than three months since I was last evaluated. So, back to square one. Okay. Back to the clinic. Back to the same tests, and back to being dilated for a thirty-second exam and staying dilated for 6 hours.

Then the bad news. Because I had Lasik surgery that changed the conformation of my cornea several years ago, the doctor is unable to guarantee that even with a lens implant I will see perfectly without glasses. But the good news is that there is a new adjustable lens implant. The bad news is that, of course, it is not covered by insurance and is only available in Dothan.

So, off to see doctor number three in Dothan for yet another two hours of tests and sitting around waiting, and, of course, dilated pupils for a thirty second exam. Doctor number three wants me to try the new eye drops that are supposed to enable patients to read without glasses prior to scheduling surgery, which, of course, he can’t do until he rechecks me in 5 months. Great. I went all the way to Dothan, after taking out a second mortgage to fill my gas tank, to get an eye drop prescription that could have been written by a local eye doctor.

O-kay. But I’m finally starting to get somewhere. Except that I’m not. When I went to pick up the prescription, the pharmacy said it needs prior insurance authorization. So I called the doctor’s office back and waited for several days to speak to someone, only to be told I do not need prior insurance authorization because insurance won’t pay for the expensive eye drops anyway (of course not, why would insurance actually pay for anything people need? Don’t get me started on the heart medication fiasco.) So back to the pharmacy, who reiterated they needed prior insurance authorization. I repeated what the doctor’s office said (Geesh, you’d think pharmacists would know what is and is not covered by insurance better than I do). By this time, I am “over it.” This process has been going on for almost a year now, and I’m no closer to being able to see than I was before. Plus, I feel like dilation is my new normal, and I’m starting to behave like a vampire who’s afraid of the light. At this point, I’m going to die of old age before I get cataract surgery. But, looking on the bright side, I could get hit by a bus tomorrow and not need surgery at all! 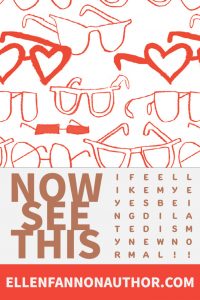