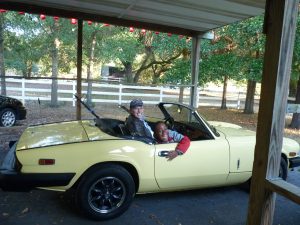 There is a strange phenomenon that occurs in men when they hit the years commonly known as the midlife crisis, which appear to be anywhere from thirty on up. Men have been known to do all kinds of crazy things, such as leave their wives for other women, grow ponytails, and buy sports cars. Of the three, only the last is an approved midlife crisis in our household. I have been through two husbands and three sports cars. (That’s because the EX didn’t realize the first was NOT an approved midlife crisis.)

The EX bought a little MG convertible. Sure, it was cool to look at and all, but as reliable transportation, not so much. I drove it exactly three times. It broke down on me exactly three times, which is when I decided it was not so much fun after all. The first time it broke down was only about a mile from the house. I stomped home, not very happy, and informed the EX of my displeasure.

“Well, did you bang on the fuel pump with a hammer?” he asked. He was serious.

Uh, no. That thought had never occurred to me.

I don’t remember time number two, but I distinctly remember time number three. I was driving to work in a torrential downpour and the car died on Lewis Turner Blvd. in the middle of nowhere. This was long before the days of cell phones and businesses on Lewis Turner Blvd. There was nothing I could do except get out and start walking to somewhere where hopefully there was a pay phone. As I trudged along soaked to the skin, a car stopped and a strange man asked if I needed a ride. I hesitated only briefly, considering the options of possibly getting into a car with a homicidal maniac or continuing to slosh along in the pouring rain looking for a phone. I opted for the first. If my battered body was later found in a ditch, it would serve the EX right, somehow, for sticking me with the MG. Fortunately, the man was not a homicidal maniac, or I wouldn’t be around to relate this story. I did feel terribly guilty for dripping all over his car, however.

Current Hubby is on his second sports car. The first, a red ’72 Triumph GT6, graced our carport as a driveway ornament for several years. Shortly after he got it, he drove it to Pensacola (not a smart idea), and had to have his teenaged son, who had just gotten his driver’s license, tow him home. The car ended up in the carport to “protect it,” and there it sat, precluding me from ever again pulling into the carport in the rain. He was always “going to fix it.” Somehow, that never happened, and I finally convinced him to sell it before we moved to Indonesia, as I didn’t think the people staying in our house during our absence would be as fond of it taking up valuable carport space as he was.

Sports car number three, a yellow 1980 Triumph Spitfire was acquired a few years ago when Hubby became antsy again and I approved this last midlife crisis. (He was still mourning the loss of the GT6.) I was shocked that he would even consider a yellow car, as yellow is not on his list of appropriate colors for anything. But he loved the car and reasoned that he could always paint it. It is still yellow. Because of the fiasco with the first car, he bought a permanent storage building for this one. The building cost more than the car. So far, he has had relatively few problems (I probably just jinxed him), other than the time he pulled over to take a picture of the U.S.S. Alabama and got stuck in the sand, having to be towed out.

I can’t drive this car because the seat doesn’t adjust and my feet don’t reach the pedals. It’s okay, as I also can’t get it to go in reverse and I would have to park only in pull-through spots. If we need to go somewhere on a nice day, he will invariably ask, “Do you want to look good, or do you want to be comfortable?” At our age, simply getting in and out of the vehicle takes some major contortions and risks injuring something. And I have to admit, the thrill of bumping along feeling like I’m two inches away from the road while my hair blows into a tangled mess that will take an hour to comb out, simply isn’t there anymore. He just doesn’t understand my choice of “being comfortable” over “looking good.” Besides, at this stage in our lives, we look like a couple of old farts trying to look cool, rather than actually looking cool. So I let him drive off by himself and be happy. Next time he gets antsy, I’m going to suggest he grow a ponytail. 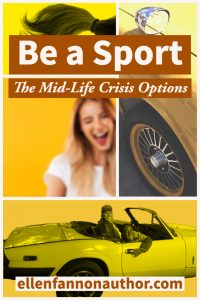