Can I Get Your Autograph 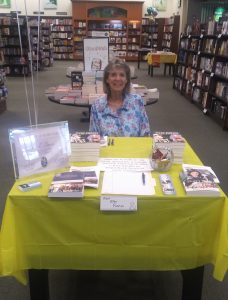 The Bible tells us in Luke 4:24 that Jesus, after being rejected in his hometown, replied with the words, “No prophet is accepted in his hometown.” These words were brought to mind as I sat watching people walk by my table at the book signing at Barnes and Noble the other day. Okay, okay, I’m no prophet. But I could easily change the words a bit to say, “No author is accepted in her hometown.” I could be John Grisham incognito for all anyone knew. It’s difficult sometimes to even get friends and family to support my expensive writing hobby. For example, Hubby refuses to chase people down and put fliers in their hands advertising my books. Shoot, if he really loved me, he would physically force people to my table and make them stand there until they realized what a talented writer I am and beg to have one of my signed books. But no, after helping me set up, he bailed because he had something more important to do, like write his sermon. Hmph! Some excuse!

There were five local authors at five tables in the store, hoping to make a few sales and get our names “out there.” It became somewhat discouraging to see people leaving the store with loads of books in their arms, none of which were mine. Watching people do their best to avoid eye contact with me made me concerned that I had “Covid Infected” stamped across my forehead. I even had a bowl of chocolates on my table to entice customers. The only person who took advantage of my goodies was a man who wandered in asking where the restroom was. After using the restroom, he stopped by my table, grabbed a chocolate and popped it into his mouth, then took another one “for the road,” without so much as glancing at my books. At least he had the decency not to discard his candy wrapper on my table.

My friend and fellow author, who was a few feet away from me was a lot bolder than I in trying to draw in customers. (I tried to do so with chocolates, but that was a dismal failure.) As people walked by, she called out, “Can I sign a book for you?” I was amused at some of the responses. Several people replied, “Not today.” Not today? What does that mean? The implication is that they might consider it tomorrow or the next day, which, of course, is impossible since we won’t be there. Why not just say, “No, thank you?” At the very least they shouldn’t give us the sliver of hope that maybe someday they will be interested. I had a couple people say they would “think about it,” which is a softer way of saying, “no.”

But the one that really baffled me was the response I got from several people who informed me, “I’m not much of a reader.” What? Well, what the heck are you doing in a Barnes and Noble bookstore? Yeah, I know, Barnes and Noble sells other items, as well as having a small café. But seriously, if you want coffee, go to Starbucks. Plus, you’re not fooling me. I see you sneaking behind the bookshelves.

This experience was certainly different from what I see on television and movies where an author has a book signing at a bookstore and people are lined up out to the sidewalk to have an autographed copy. All I can say is, those people who didn’t buy my books will be sorry when I’m dead and my autographed books are worth a ton of money. 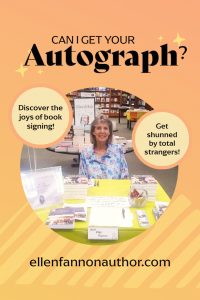