Out of the Mouths of Babes

When I was in kindergarten (yes, they DID have kindergarten back then), my teacher’s name was Mrs. Dahlke (pronounced doll-key). As you might well imagine with a group of five-year-olds whose pronunciation skills were less than honed, we all called her “Mrs. Donkey.” This mispronunciation of her name irritated the fool out of her. So she tried to correct us by breaking the difficult name down into syllables.

“Donkey,” came our response. I’m not sure we ever completely pronounced her name correctly throughout our kindergarten year, which served her right for teaching kindergarten with a name like hers and expecting not to be called “Mrs. Donkey.” She should have just hee-hawed and gone with the flow. Or taught high school English.

Fast forward about thirty-five years to when Hubby was a pilot in the Air Force and Older Son, who was about two at the time, kept telling everyone his dad was a “pirate.” I really didn’t want people to get the impression that my husband was a person who attacked and robbed ships on the high seas. So, remembering my lesson way back in kindergarten, I set about to correct his pronunciation.

I grew excited. “Very good. Now, tell me what Daddy does.”

Sometimes, where small children are concerned, it just doesn’t pay to try and one just needs to take a lesson from Frozen and let it go. 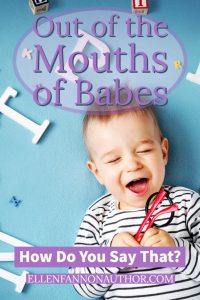